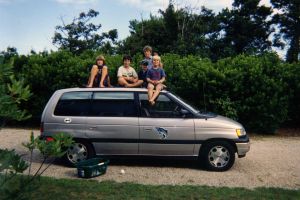 All this talk of road trips and covert phone calls got me thinking. I’ve learned a thing or two in my many years as wife to Sam and mother to three sons.  One, men and women have, shall we say, different conversational needs.  And two, there comes a time in every male child’s life when he goes to bed a boy and wakes up a man.  You won’t notice it at breakfast. In fact, you might not notice anything different for a long time.  Not, perhaps, until you are at the start of a road trip…

The minivan was stuffed with gear. Sam had made his fourth trip to “secure the perimeter”, assuring himself that doors he had already locked four times were, in fact, locked.  The boys were settled in, GameBoys and iPods at the ready.  I was the last to get in the car and when I did, I turned brightly to the men in my life and asked,

“So, we have five hours. What’re we going to talk about?”

Silence. Until that moment, I don’t think I knew the meaning of the word.

Finally, Henry decided someone had to set me straight.

Which reminds me of another thing I’ve learned: When traveling with men, bring a large stack of magazines.